This weekend there have been a number of protests in the UK over the  Lock Down, aka citizens house arrest. Piers Corbyn, the ex Labour leaders brother was arrested link here and the writer and journalist James Dellingpole was threatened with them same punishment link to video here.

In part one here, in case you missed itI looked at the governments response to Covid19 and the influence Neil Ferguson seems to have, bringing about a 180 degree turn in government policy. So what changed their mind?

The Vaccine Impact Modelling Consortium, of which Neil Ferguson is director, is hosted at Imperial College London (ICL). It is funded by the Bill and Melinda Gates Foundation and by “GAVI, the vaccine alliance” (Their words, not mine)

Bill and Melinda Gates began funding ICL in 2006, four years before the Gates Foundation launched the Global Health Leaders Launch Decade of Vaccines Collaboration (GHLLDVC), details here and one year after Ferguson had demonstrated his skill in projections on deaths from H5N1.

Gates was the second-largest sponsor, beaten by the Welcome Trust, a British research charity which, by the end of 2018, had already provided ICL with over $400M in funding. It also has a taste for global immunization programes, interestingly.

The Global Vaccine Action Plan will enable greater coordination across all stakeholder groups – national governments, multilateral organizations, civil society, the private sector and philanthropic organizations — and will identify critical policy, resource, and other gaps that must be addressed to realize the life-saving potential of vaccines.

Those involved at the time include the Director-General of the WHO, the Director of NIAID, the Director of UNICEF, the President of Gates Foundation Global Health, and the Chair of the African Malaria Alliance as well as the UK Department of Health, and other representatives from the WHO, UNICEF and associated organizations. It is a cluster of immunization-focused individuals who control the policy of health governing bodies, (they claim to be neutral).

The WHO, who were so slow in identifying the COVID19 threat, was nominated as the

along with other tasks linked to the policy of global immunization.

UNICEF boldly states it is “world’s largest provider of vaccines for developing countries” it has access to children in over 150 territories and countries (2010).

There are clearly some conflicts of interest behind the Ferguson model on Covid19, and if we look a the connections made to pharmaceutical big hitters it seems they are protecting its own interests, over any genuine concerns for the health and welfare of populations, both global and national. 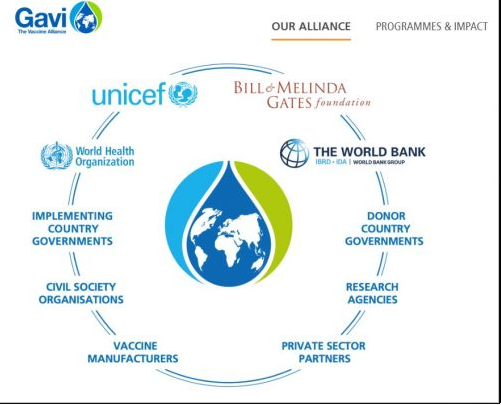 “Gavi is the Vaccine Alliance, which brings together public and private sectors with the shared goal of creating equal access to vaccines for children, wherever they live.”

GAVI is funded and by the same network that forms the GHLLDVC, with some additions:  The Gates Foundation is a primary sponsor, but is topped by the British Government, which was instrumental in creating GAVI and is its largest donor!

mobilise at least US$ 7.4 billion in additional resources to protect the next generation with vaccines, reduce disease inequality and create a healthier, safer and more prosperous world.”

When Bill Gates partnered with GAVI twenty years ago, he had been considering where next to focus his energies and was “increasingly focusing on the power and potential of vaccines”.

It was Gates’ sponsorship that launched GAVI, and ten years later Gates launched his own “vaccine decade” plan for the 2010s.

GAVI is also closely connected to the ID2020 project (Digital Identity Alliance), incorporating Accenture, Microsoft, Ideo-Org and Rockefeller Foundation , all with ties to the ID2020 initiative.

ID2020 is promoting the concept that there is a need for universal bio metric verification, because

“to prove who you are is a fundamental and universal human right,”

In an article by Kurt Nimmo for Global Research dismantles the “humanitarian” alibi for tyranny.

What they really want is a fully standardized data collection and retrieval format, and cross-border sharing of identities of the entire population of the planet, in order for the stand-alone AI-powered command center to work without a hitch, and for purposes of calculating everyone’s potential contribution, and threat to the system.

Nimmo describes the potential for Covid–19 to be used as cover for mandatory biometric ID. An April article carried by Reuters confirms the suspicion that biometric ID might soon be introduced, ostensibly to “help verify those who already had the infection and ensure the vulnerable get the vaccine when it is launched”. This may sound perfectly sensible to those who are buying the government narrative on Covid19 but

“COVID–19 is the perfect Trojan horse for a control freak state itching to not only micromanage the lives of ordinary citizens but also ferret out critics and potential adversaries and punish them as enemies of the state.”

Prashant Yadav, senior fellow at the US-based Center for Global Development, has said

Biometric IDs can be a game changer. They can help governments target population segments e.g healthcare professionals or the elderly population, verify people who have received vaccination, and have a clear record.

Which segment do you think they would want to target? Such statements can easily be used for mandatory vaccination and the inclusion of bio metric ID in the whole package.

Martin Armstrong of Armstrong Technologies introduces an even more sinister projection into the mix.

Armstrong talks about a digital certificate that verifies you have been vaccinated, developed by the Massachusetts Institute of Technology (MIT) and Microsoft, which will merge with ID2020. Covid19 will be exploited to encourage us to accept digital implants and tracking devices that will enable authorities to keep an eye on us.

Armstrong argues that just as 9/11 conditioned us to accept X-ray booths at airports, now we will be chipped. Scary? Very.

At this point, it is worth remembering that UKAID is heavily involved in GAVI, and one presumes they are on board with the digital ID2020 project.

In December 2019, researchers at MIT created a “microneedle platform here using fluorescent particles called quantum dots (QD) which can deliver vaccines and at the same time, invisibly encode vaccination history in the skin”: the QDs can be detected by specially adapted smartphones. (Some might call this the mark of the beast, but that’s a theology discussion)

The “new normal” will mean we are tracked and monitored by our own communication systems to an even greater and more intrusive extent.

The UN has issued a warning that the economic downturn could “kill hundreds of thousands of children in 2020”.

Gates, the WHO, the British Government and UNICEF are focused on global immunisation for a “pandemic” that is not living up to the alarmist virtual projections sponsored by Gates and the Big Pharma complex while we are going to experience “steepest downturn since the Great Depression of the 1930s” (IMF). Last week the Govorner of the Bank Of England said on ITV news, and I paraphrase, ‘This will be the worst recession for 300 years’ I kid you not!

Is this who is driving the Covid19 response?

Who will suffer most from the end result?

If 2008 is anything to go by, I think we know the answer, in part 3 I’ll look at what would have had happened if the UK didn’t adopt a lock down sledgehammer to crack a flu like walnut.

If you liked this, why not help keep me going? You can buy me a coffee at https://Ko-fi.com/algwriter

If you enjoyed this, why not help keep me going? You can buy me a coffee (or a beer!) at https://Ko-fi.com/algwriter